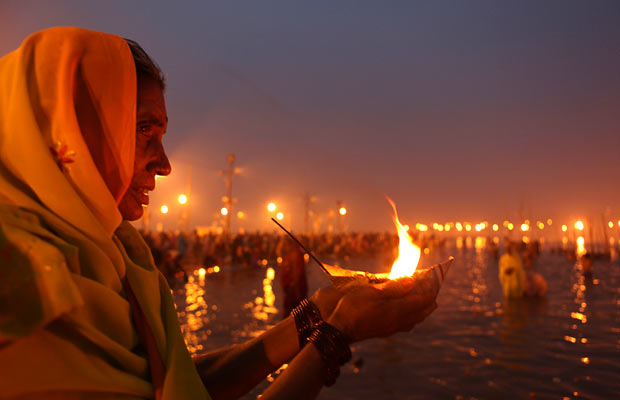 The candle sheds the vivid light all around, whereas the moon cannot caress the darkness of the forest. A very young boy carries magic stones, myrrh and a bunch of incense sticks. I cannot pronounce his name, but it sounds like an ancient lullaby. The primordial drum vibes with giant, clear notes. So, the old man with the majestic voice whispers his song.

“Why did he throw the seeds into the fire, then?” – a voice next to me asks.

After joined many ceremonies one day I asked myself the same. What if there were no sacred gestures? What does it make the difference?

“Rituals are calls for the healing to occur. They evoke the collective imaginary to presence a significant event. If you rest in faith and stillness, magic appears without stress” – I finally reply.

There is a verge point where ancient healing systems collide together, from Ayurveda to Chinese traditions passing through Shamanism, it looks that they all share symbolism and visions of wisdom, a hidden language of psychological matrix able to materialize atavistic fears and metaphors of existence. This is a language of primordial importance for the balance of the subconscious mind and the delicate rational being. Like suggested by our recent evolution, the intuitive, non-verbal sensitivity of the right hemisphere has been obscured by the active development in the left, analytical, surgical hemisphere. This modern gap reflects the imbalance in intracortical manifestation which marks the discrepancies in the social life. The miscommunication of our two brains emerges as a rudimentary conflict, a lack of compassion and acceptance for the supernatural.

Symbolism potentially connects us to a flourishing, multidimensional system of knowledge where the poetic, subjective abstract object is capable of amplifying a perception and not reducing it to a flat, precise concept. We have all been trained to think and communicate through a universal, delimited set of symbols or alphabetical letters which are reduced into objective images in order to categorize, simplify and homologate. It is obviously convenient for us to keep fluid, understandable interactions; it is the common field, the shared reality to sustain.

But the image, the form and the symbol they are there before us, before the mind. They are available for expanding a whole complex of intuitive notions or states of being which cannot be described or defined but only experienced.

So, why does the modern society demonize the symbolic?

Many rituals involve religious practice and beliefs, entirely or partially they are part of a culture or closely related to a collective mind acting in a sacred space that can eventually be dislocated into a spaceless, timeless realm; the opposite of a factual world, the one that the rational man looks for.

It seems like we are sabotaging this beautiful connection, actively disarming the state of magic.

To lose this connection means to lose the continuum of our evolutionary path, particularly missing the integrative points. Beneath our shiny neocortex the two earlier forms of the reptilian brain and limbic system are still performing as they did since older times. These three components should work cooperatively for reaching a natural homeostasis. Here comes the disruption, the rational being taking the distance from its very roots.

Carl Sagan in his poetic cosmology believes that essentially human culture is the function of the ‘corpus callosum’ the brain’s bridge between the left and right hemispheres and states that”…the hallmark of a successful, long-lived civilization may be the ability to achieve a lasting peace among the several brain components”.

So, how can we make this connection possible?

Sometimes symbols appear in obvious forms, sometimes we need to interpret them. There are ancient gestures known in India as Mudras, literally channeling the energy through the movement of the hands. Prayer or Namaskara Mudra is a suggestive gesture performed by joining the two hands together, an everlasting symbol of kindness and peace, borrowed through ages from different cultures all over the world. In this Mudra the two hands are pressed together and held near the heart with the head gently bowed as one says, “Namaste” meaning ‘the divine in me honors the divine in you’. In the simplest of terms it is accepted as a humble greeting straight from the heart and reciprocated accordingly. Mostly recognized in all Eastern countries as a symbol of devotion, it evokes a ceremonial prayer to give thanks without bedding.

Other iconographical symbols came from the dawn of the humanity, from the darkness of a cave or hidden in temples. Collectively known as archaic art, they represent sacred animals, sun and moon, ideograms and stylized shapes reminding the clever emphasis of a distinctive characteristic or archetype. Just to mention the sophisticated, sacred geometry of ‘the flower of life’ a harmonious shape composed of multiple evenly-spaced, overlapping circles arranged in a flower like pattern. The flower indeed it is believed to contain a type of Akashic Record (mystical knowledge embedded in a non-physical plane) of basic information of all living things and is the visual expression of the connections of life that run through all sentient beings. The symbol itself evokes a vibrant, fundamental perfection and has been used in multiple settings and different ages to recall the holy forces of the creation.

Believe it or not, to call the symbolic is to catalyze this ancient connection. Not just in the dream world, but in everyday life. We are still burning the witch inside to disintegrate this living, strong creature called primordial consciousness. In this light a sacred ritual is the celebration of the majestic forces that we perceived at the very beginning, the rise of the gods with their magic arsenal of healing. This is the very first step to enlighten the obscure cave of the subconscious production.